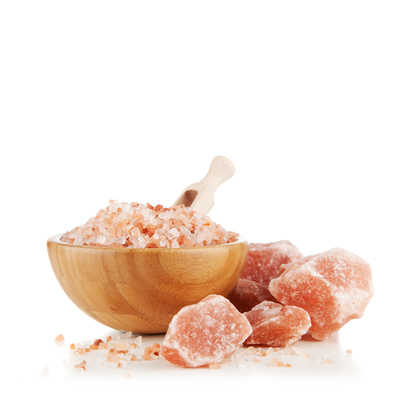 The Himalayas were supposedly formed by drifting of an enormous island that ultimately collided with the Asian land mass and pushed the mountains towards the sky.  The sea water eventually crystallized and formed the pinkish salts that have become so popular in today’s mineral deficient world.  The salt is ancient and comes from pristine sources.  Analyses of the salt have identified at least 84 different minerals that make up a small percentage of the total bulk, which, of course, consists of sodium chloride. The color of the salt varies from almost white to deep pink. Like most salts, it is found in crystalline form and can be ground as finely as one wishes or simply added in a small amount to a carafe of water that is sipped over a period of days or weeks.

For those who are trying to improve their intake of iodine, Himalayan pink salt contains a significant amount of iodine. You will exceed your minimum daily requirement of iodine even if taking less than an eighth of a teaspoon of salt per day.

There are no reviews yet.

Only logged in customers who have purchased this product may leave a review.