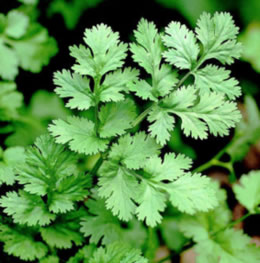 Cilantro is native to the Mediterranean and likes some coolness and dampness in spring and then lots of sun and good drainage in summer. It prefers morning sun but can tolerate shade in the afternoon. The plant does not live long so keep sowing more seeds every three weeks or so. If you plant in pots, make sure they are deep enough for the taproot. Do not try to transplant. If growing outdoors rather that in containers, consider planting it near anise but not fennel.

Both the leaves and seed are edible but the taste (and aroma) are very different. The leaves can be used as a garnish in much the same way as parsley or used in a smoothie or juiced with other vegetables and herbs to make a green drink. They can also be made into a pesto, salsa, chutney, or stuffing as in the Portuguese dish açorda. It also makes a nice variant of quiche. If you want to be really exotic, you can make your own sorbet or ice cream with cilantro but try mixing it with fruit such as lemon or pineapple or mango. Dried coriander was found in the tomb of King Tutankhamen so this plant has been in use for thousands of years. It is mentioned in the Old Testament and was found in an archaeological site in Israel.

Though cilantro might be one of the more popular flavoring agent in the world, many are unfamiliar with its taste of cilantro and might have a love-hate relationship with it. The flavor is “different” and while appreciating the benefits, many people really have an aversion to the taste. You might be able to cut the taste back a bit by combining cilantro with mint or basil. If you dare to make an ice cream, try using some ground cardamom as well as coriander seed (the seed is called coriander and the leaf is called cilantro.)

The root is also edible and is used in Thai cuisine. 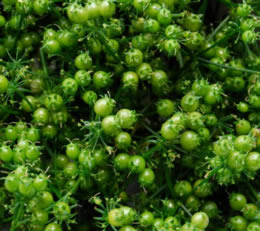 Unlike some herbs and spices, coriander is cooling. Besides its usefulness in chelating toxic metals, the seed is considered by some to be an aphrodisiac and by others to be the secret of immortality. The seed has a unique property of improving with age.

In Ayurveda, cilantro and coriander are both regarded as ideal for pitta derangements because of the cooling effect, but the herb and seed are also used to clear ama and promote proper digestion which in turn reduces allergies. The finely chopped leaves are often used in lassi, a drink made with water and yoghurt that is often served with Indian meals.

Medicinally, cilantro is used to clear inflammation from the urinary tract and to promote proper flow of urine.

Both the leaf and seed are antioxidants, the leaf being more potent than the seed. The seeds are diuretic and have a tendency to regulate insulin and cholesterol.