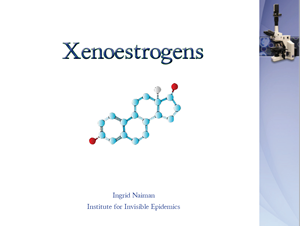 Chemicals that mimic natural estrogens are generally from synthetic contaminants such as plastics, PVC materials, pesticides, petroleum products, and certain pharmaceuticals. To this, we can add growth hormone additives that are ingested through consumption of non-organic animal products, birth control pills, and perhaps some phytoestrogenic botanicals though this is more controversial.

Where dental materials are involved, the primary sources of xenoestrogens — very potent chemicals that can cause undesirable and sometimes serious side effects — are composite dental restorations and various bonding agents used to cement inlays, onlays, and crowns to teeth.

After a tooth is etched in preparation for the bonding agent, a liquid plastic resin is applied to the tooth. This is then cured with a light that acts as a catalyst to the materials in the bonding agent that cause the resin to set or harden. There is a lot of technical terminology for these processes, but the bottom line is that composite restorations as well as some dental cements contain bisphenol-A which is a xenoestrogen.

All plastics leach estrogen analogues to which some people are much more sensitive than others. I had one experience with a bonding agent that was at least five times worse than the Menopause, and I know of many cancer patients whose tumor markers soared after dental procedures were performed.

Composites are an inexpensive alternative to amalgams but whether or not to use them is a serious question. The advantage is that they are reasonably aesthetic in that they match the natural tooth color. The disadvantage is that they are not particularly durable when used as a filling, but whether used to cement crowns or as filling, bisphenol-A is detectable in the saliva of people with this material in mouth.

Bisphenol-A is a plastic that has been in use since the late 19th century. Its safety has been questioned since the 1930s. It is used to make polycarbonate plastics and epoxy resins which are hard and nearly shatter-proof. It is in very wide commercial use, everything from CDs and DVDs to dental and medical materials to the lining inside cans.

For recycling purposes, plastics are classified into seven types. Of these, type 3 (PVC) and type 7 (catch-all) both leach bisphenol-A.

What is “not good” about this is that even if hard, bisphenol-A is an endocrine disruptor. The fact that bisphenol-A is also estrogenic has been known since the 1930s. In the last twelve years, over 100 studies have underscored various safety considerations ranging from obesity to neurotoxicity, but the most serious concerns are over fetal development and future cancer, especially of the breast.

Bisphenol-A is both a toxin and a carcinogen and yet it is used in everything from baby bottles to medical materials. Studies have been conducted over an 80-year period on rats, primates, and humans. The conclusions are similar: exposure during pregnancy has profound effects on sexual development and behavior as well as brain function, especially the part of the brain associated with memory. It affects the hypothalamus, the thyroid, the breasts, the ovaries, and the genitalia. It even affects the part of the brain associated with sexual behavior and the ability to distinguish gender-based behavior.

In a study published in the Journal of the American Medical Association, higher concentrations of bisphenol-A in the urine correlated with heart conditions, diabetes, and elevated levels of certain liver enzymes.

In October 2008, Canada officially recognized bisphenol-A as a hazardous substance. The European Union did not concur with Canada but Denmark has banned bisphenol-A in water coolers. In the U.S., the handwriting is on the wall. Bisphenol-A will eventually be found to be toxic and victim compensation will become a heated issue as will the question that always arises in such situations: “When did you first realize that bisphenol-A poses grave risks to health?” The second question is also obvious: “What did you do when you first realized the danger of bisphenol-A?” The answer will be heart-breaking: industry will have done all it could to rake in profits before the curtain falls on yet another shameful corporate cover up.

The counter-argument is, of course, that there are numerous practical uses for this hazardous substance so the issue will circle around whether or not we as a civilization are willing to trade convenience for health. To-date, the balance is very much tilted towards convenience.

Though the risks of bisphenol-A are greatest in the unborn and newly born, all studies of species with shorter reproductive cycles than humans suggest that this chemical strongly affects the reproductive system, obviously in an adverse manner. However, anyone exhibiting any signs of prior harm — believed to be irreversible — of bisphenol-A are also well-advised to avoid contact with anything containing this toxin. Not only does this mean finding appropriate substitute dental materials — and perhaps even avoiding contact lenses — but also avoiding the use of plastics, including those used to line cans, to the maximum extent possible. Personally, I would include the following people in this alert group: anyone with diabetes, anyone with neurological issues, anyone with abnormal development of the reproductive system, and anyone with a disease of the reproductive system, especially cancer. “Abnormal” is always a trigger word but this would include anything as inconspicuous to others as premature puberty and longer menstrual cycles to exaggerated female secondary sexual characteristics such as large breasts and more curvacious contours. For men, abnormal would apply to anyone with a larger prostate than normal but less testerone production. For both genders, infertility and/or confusion about sexual behavior as well as memory problems could be indications that further exposure to bisphenol-A contaminants should be rigorously avoided.

What this means in practical terms is selecting dental materials from a somewhat short list of alternatives. I personally strongly favor Cerec dental restorations using a bonding agent that does not contain bisphenol-A .

More on this subject by Ingrid Naiman >>